A Christmas Dinner through the Ages

It’s that time of the year already…the first snow has arrived in the Netherlands, but unfortunately we do not expect a white Christmas. Our office for the last month has been decorated with a lovely Christmas tree and outside many houses are displaying their yearly ornaments. Christmas is a time to get together, so what better time for us to have our last company get-together at the end of 2018.

We concluded our year with a Medieval cooking workshop at De Hemel, a local brewery located in our country’s oldest city, Nijmegen. After our hostess provided us with some 16th century appetizers, consisting of meat pastries, mushroom tapenade on toast, fresh bread with various herb dips and of course, wine, we were treated to a presentation about Christmas meals through the ages. Since Christmas as we currently know it was not celebrated back then, information about the dishes came from the meals that were prepared and eaten during the month of December. 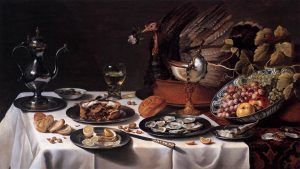 We were handed a seven page booklet filled with various recipes from the past, ranging from the 14th to the 18th century. We made pairs of two and each pair picked one, some even two, meals to prepare. Some recipes were a bit challenging but in the end everyone managed to prepare their meal(s).

We then had to serve the dishes and were able to choose from a wide array of beautiful tableware to present the fruits of our labor. Finally, we ended up with a table full of different meals, most of them tasting delicious. One particular thing that we noticed is that the upper class in olden times used a lot of eggs, butter, cinnamon, nutmeg, saffron, sage, dates, figs and oranges in their various winter dishes.

Certain dishes really stood out, such as the pheasant meat pie. The pie was decorated with dough figures and capped off by placing a stuffed pheasant on top of the pie. Placing a bird on top is something that was traditionally done to make the pie look like a work of art. Another standout was a dish that is called ‘gekloven nonnen’ in Dutch. The dish is an egg filled with a stuffing of dades, figs and ham. After the egg is filled, it is covered in a batter of a mixture of egg and certain spices and fried in oil. The end result was a tasty filled egg surrounded by an omelet. The favourite dish of most people was the duck with a date compote.

We are wishing you all the best that a holiday could offer.

Have a very merry Christmas and a Happy New Year!