On Friday the 3rd of February we had our biannual company get together. This time, lovely Amsterdam was the venue for our non-work related social excursion. 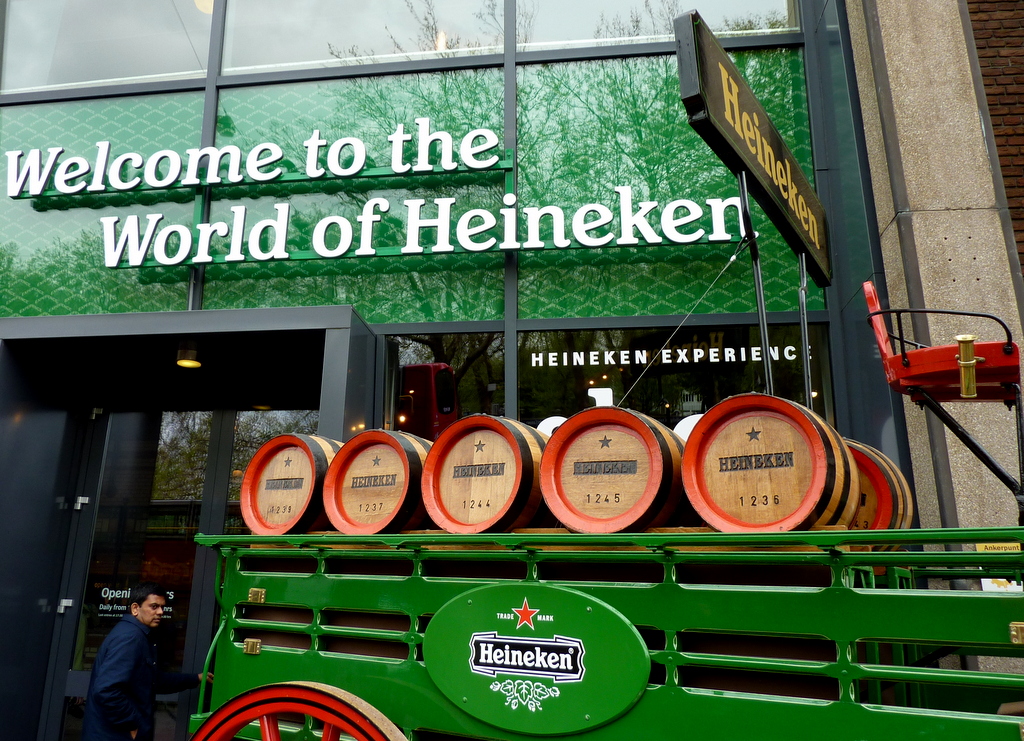 After doing some hard work in the morning, lunch included of course, we headed to the train station in Elst where an hour later we arrived at Amsterdam Central Station. Since the weather was relatively mild for this time of the year we decided we could easily walk through the center of our nations capital to our first destination : The Heineken Experience. The Heineken Head offices, the Experience and factory are located in the heart of Amsterdam, making it a great (tourist) attraction.

After we received our Heineken bracelets, which included exchangable buttons for free beer, we started the tour. The first part of the tour had its focus on the past of the Dutch beer company, as Heineken’s history was in full display, showing personal letters from its founders, pictures of long gone employees and the various medals won through the years.

The next part of the tour was very beer-centered in the sense that the past and current process of beer-making, and even beer-distributing, was displayed as there were also stables in the building, housing horses which are still used to this day to deliver beer around the city of Amsterdam. After a short but exiting simulation on how it felt like to be one of Heineken’s beers, the next part of the tour focused on Heineken’s current endeavors and allowed the visitors to play some games, ride virtual bikes, make music and print their own beer label.

The final part of the tour was the busiest, as it provided an opportunity to exchange your removable bracelet-buttons for free beer. After a few drinks and a visit to the on-premise store, we headed to our dinner reservations for the evening.

The tapas centered dinner at Orestis was accompanied with a murder, as the event was set up as a murder-dinner, where half of our group played the suspects and the other half detectives.

After a brief introductory news bulleting regarding the murder, both on-screen and by our police officer host,  the roles were divided and costumes and scripts were handed out. After everyone received their instructions, clues had to be gathered by examining the victim’s body. The detectives had time to interrogate the various suspects during the meal courses, with them hopefully getting enough information at the end of the evening to make a solid case against one of the suspects.