While the emphasis in 2015 was the rebranding of our software, the highlights being the creation of a new logo and accompagnied website, we continued this train of thought in 2016 by adding new questiontypes, additional features and a brand new interface. The year began by us celebrating our Crystal Anniversary as EyeQuestion Software became 15 years old. From humble beginnings in Utrecht, the Netherlands, to a customer base from all over the globe, we are very proud to see how far we have come.

This has also been evident in the amount of conferences visited this year, as we flew to Austria, China, Italy, the United Kingdom, France and the United States to set up our booth and meet our customers. An additional bonus and pat on the back was the fact that we had won the National Business Success Award for the year, as it gave us an added confirmation that our company was doing well.

Expansion of EyeQuestion was done with you, our valued customer, in mind. Additions such as the Historical Database, Product Database and Attribute Database were added in order to streamline the workflow when creating a project. We have also added question templates based on Rapid Methods (Flash Profling, Dynamic Profiling and Rapid Consensus Profling) to add a new dynamic to our questionnaires for both the project manager and panelist. 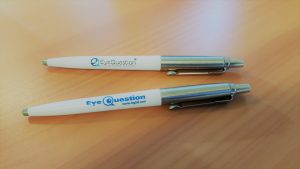 The addition of new questiontypes and features would not be possible without the release of EyeQuestion 4. EyeQuestion 4 was first shown in 2015, during the Pangborn symposium in Sweden, where it was met with very positive results. Everyone seemed to especially like the user friendliness and new color layout. After a lot of hard work by our staff in balancing the creation of the new EyeQuestion and improvement of the now Classic EyeQuestion, EyeQuestion 4 was finally released at the end of 2016.