Over the last few years we have been adding XR (Extended Reality) to our software solution.  This includes the expansion of  EyeQuestion to include VR (Virtual Reality) and AR (Augmented Reality). XR combines both  the digital and the real world in the form of a technology-mediated experience. Both the  hardware (for example the use of VR goggles) and software (for example EyeQuestion) are needed to enable content creation for VR, AR and MR (Mixed Reality). By using these tools, users can generate new forms of reality by placing digital objects into the physical world.

Augmented Reality (AR) enhances existing reality by placing computer generated objects in the real world. Users are allowed to interact with these objects and this is often used in combination with mobile devices due to the on board camera being used as an ideal viewpoint for the user to blend digital components in the real world.

There are different techniques to generate these new forms of reality, one of them is by using a marker where digital content is placed on. A great way of using this marker based technology with AR in Sensory was demonstrated by the University of Tokyo in Japan back in 2010, which we commented on on in our VR Dining blog. With the new techniques available and this example in our mind we started to think what would be a good example project where we could use Augmented Reality.

One idea that we had is to see if it is possible to use Augmented Reality (AR) to let panelists select the perfect portion of a certain dish whilst being in their own natural environment. We were able to do this using EyeQuestion in combination with the usage of different markers where a 3D model of  various pizza’s were plotted. The panelist was able to change the size with their fingers by pinching the screen until their ideal portion size was reached. To mimic the natural environment we used our Immersive Room to create the full experience of an Italian Restaurant

At this moment we are working with devices like an tablet or phone that shows the content on your screen. In the ideal situation you would want to use Augmented Glasses for such a test. Because of the high price of these glasses they where mainly focussed on business. Example of these glasses are the HoloLens and Magic Leap. Now you so more and more consumer glasses coming to the market. We are currently evaluating NReal but also Facebook will be launching their version of smart glasses in 2021. With those Augmented glasses  you can show see the digital content though your own eyes before you do your evaluation. The addition of scent using, for example, the Olorama device would complete the immersive experience for a panelist. 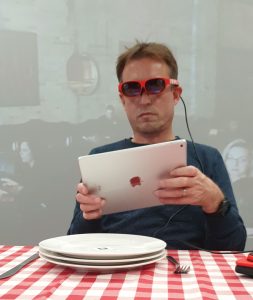 PrevPreviousTasting beer around the world during a pandemic
NextConferences 2020Next