Symposium: The potential of Virtual Reality for eating behavior research and behavior change

On the 9th of June, the University of Utrecht held a symposium about the potential of Virtual Reality in research about eating behavior and behavior change. Virtual Reality (VR) is a tool which allows data to be collected in a controlled, yet highly realistic environment. This relatively new computer technology is being used more and more due to its low costs and flexible nature. The term Virtual Reality is very broad, as all virtual or imaginary environments that simulate a person’s physical presence in this artificial world can be labelled as a Virtual Reality. This wide nature of its definition was displayed during the symposium, as presenters displayed the various ways they used VR, and how they have set up their own virtual world, to research eating behaviour and behaviour change. 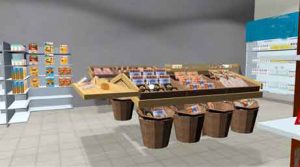 The symposium started with a presentation about the VIRTUE project and the development of the NeuroShop, a virtual supermarket which can be used for free in scientific research. Click here to learn more about the NeuroShop and the current research of the Nutritional Neuroscience Laboratory.

While the presentation about the NeuroShop focused more on the activity of the brain during a specific action, namely shopping, the next presentation displayed a quite different use for VR as it dealt with the questions if there was an objective reality by looking at the way people with anorexia view themselves. Anouk Keizer from the University of Utrecht did research on this subject by comparing the way the patients viewed an image of themselves by using a mirror and by looking at a photograph. An early conclusion was that solely a visual impulse, in the case of the photograph, was not sufficient as the patients who viewed into the mirror viewed themselves as being larger than they were because the way they feel was also considered. The next step was the use of VR by using VR goggles and having a virtual body being displayed instead of their own while, both the virtual and real body, was stroked by a brush. This method is called the rubber hand illusion and has been used to create a feeling of body ownership. For more information about this subject please check Anouk Keizer’s website, where you can find her publications.

Continuing the symposium was the Human Concern Foundation, who specialize in eating disorders. This is an organization that uses VR to show the inner thoughts of a person who is suffering from this disease. Their focus is to treat the core of the problem and not just the symptoms. They have created a set of movies which relatives and close acquaintances can experience through VR and thus, gaining a better understanding of the patient’s inner monologue. The project is run by professional therapists who have had such a disorder earlier in their life and have gotten through it. By employing people who have such a clear understanding of the issue, patients are feeling their voices heard clearer as there is a degree of thrust already there.

During the break, there were several demonstrations in which we could ‘walk around’ in the NeuroShop, view the VR experience of the Human Concern Foundation and experience a VR Dining in which VR is combined with dining. 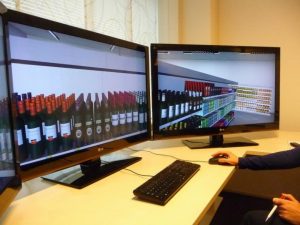 The participants were seated in front of a PC with 3 large LCD screens and could navigate with the mouse and keyboard trough the virtual supermarket. When a product is selected, it would appear enlarged, in 3D, on the screen including the shelf tag and the products could be rotated for a complete overview. They had an innovative system in which the researchers could easily put products on the shelves, change self-tags and display advertisements. Something that could still be improved would be that if a product was taken from the shelves, the spot would be empty. Now, the shelves are always completely filled. The researchers concluded that virtual reality has potential, especially when shelf position is concerned. However, they also showed that people tend to buy more in the virtual supermarket compared to a real supermarket. But in the case of an over responded advertisement, it still reflects the real life but in a smaller extent.

Eat-Lab, part of Maastricht University, presented the results of a study about contextual appetitive conditioning in virtual reality.  As part of her postdoctoral research, Karolien van den Akker stated that eating desires are elicited through exposure to stimuli associated with tasty food (e.g. smells, time of the day, specific situations). The Eat-Lab was interested if VR can be used to elicit a conditioned response to a specific context after repeating this context with the intake of food. During tests with animals, this has already been shown, better known as the Pavlov effect. The participants were repeatedly exposed to two specific contexts in a VR environment. One of the contexts was always paired with a milkshake (CS+), while one of the contexts was never paired with a milkshake (CS-). After this conditioning phase, the participants were again exposed the CS+ and CS- environment. For the CS+ environment, the milkshake expectancy and desire was higher than for the CS- environment. The participants were presented a milkshake again and it appeared that high impulsive participants consumed more milkshake in the CS+ environment. Low impulsive participants did not. 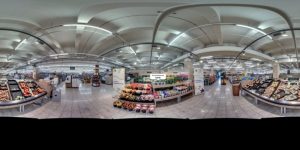 The Wageningen Economic Research department showed a more simplistic version of the virtual supermarket. For their study, they did not have the time and budget to create an entire virtual supermarket and decided to use a 360º picture. The 360º picture has a lot of advantages. For example, it can be easily created using a mobile device and the ‘environment’ you are placed in during the VR experience is photo realistic. You can quickly adjust to any situation, since all you need is a 360º photo of the environment.

The subject of the last presentation was about a subject one might not directly think of when hearing about VR. Garmt Dijksterhuis from the WUR Food & Biobased Research gave a sneak preview of the ‘Experience Room’ which is located in the Restaurant of the Future. In this room, any surrounding can be created by using beamers projecting an environment on the walls, supported by sounds and smells. This will make it possible to perform studies in specific simulated environments while still being able to control the situation. The Experience room is expected to be launched in the autumn of 2017.

The symposium did not only show us the various methods that can be classified as VR, but also the wide range of disciplines in which Virtual Reality can be used to conduct research. As the technology is improving at a steady rate, the virtual environment that can be created will be more lifelike, causing the gaps between the real world and the virtual one to become even smaller.