After a long trip from Holland to the east of France, we unpacked our bags and were already preparing for the user meeting, which was held on Sunday at the Hotel Mercure Dijon Centre Clemenceau. The hotel was the venue of our first EyeQuestion user meeting of 2016. The meeting provided an opportunity for us to discuss the world of sensory science with our customers as well as receive some welcome feedback about our software. 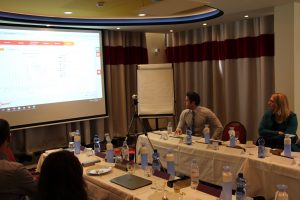 During the user meeting, we were able to show features that we have worked on in the past year. These included:

Attendees also had the opportunity to ask questions to our staff and share tips & tricks about the usage of our software suite.

We would like to thank everybody who was attending the user meeting and hope to see you back at our next one in the near future.

After the user meeting we crossed the street and went to the Palais des Congrès where the EuroSense Conference started off. With 664 participants this has been the largest EuroSense until now. We were also present with the largest team until now, six colleagues of the EyeQuestion team were present. At our booth we have had chance to reacquaint many of our existing customers as well as to give live demonstrations of our software to other interested parties. 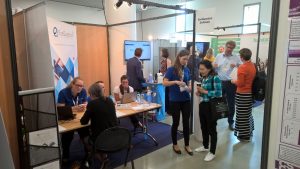 Luckily we also had the opportunity to visit many presentations, which gave us a lot of food for thought. The time flew by, and as we had learned from the first keynote speaker Sylvie Droit Vollet, this meant that we were in a happy mood 🙂

There were many interesting topics, unfortunately too many to mention them all here. We have learned that our emotions are not universal as small remote communities interpret emotions differently then larger groups, more often found in Western societies. When we explore consumer behavior some more, we find out that people have different (personality) traits that influence product choice. For example, some individuals would like to have a lot of information on the package while others are lead by their emotions and prefer images on the package to base their choice on. Some people have stronger emotional feelings then others and those with stronger feelings prefer sensory stimulation more than others (e.g. good looking and good tasting food). Therefore it is important to measure psychological traits to understand the motivation of consumers. Or, if you already know the relevant psychological traits they can be used as a screening tool.

We have also attended an inspiring workshop about Consumer Motivation & Implicit-Impulsive Tests. A new method, the Impulsive Emotion Test (IET) was presented. Emotions can be helpful to differentiate products with similar liking scores. The IET will present emotional states on the screen while the assessor has to indicate if the emotion applies or not as fast as they can. This method was compared to a CATA task, resulting in significantly more emotions being measured compared to the CATA task, which only revealed the strongest emotion. Further research is necessary to investigate which method is most appropriate, depending on the research question.

The workshop continued with the Approach-Avoidence Test (AAT). We learned that 96% of our behavior is led by the unconscious brain system. In the AAT method, a joystick is used to express the attitude towards a stimulus. The joystick will register whether it is pushed or pulled as well as the reaction time. The idea is that the joystick is pulled for positive stimuli and pushed for negative stimuli. The panelist is not instructed when to push or pull. The disadvantage of this method is the perspective of the panelist. Some panelists see the subject as fixed, meaning that pulling the joystick is bringing the stimuli towards themselves (approach). Other panelists might see the stimuli as fixed, which means that pulling the joystick is actually seen as going backwards from the stimuli (avoidance).  A novel method was introduced which should avoid the difference in perspective, the Swipe Approach-Avoidance Procedure (SWAAP). In this method, the stimuli is displayed on a tablet and the panelist should swipe the image down (approach) or up (avoidance).

The workshop ended with a presentation about gamification, which is a style of survey questioning that involves aspects of play. Binning questions, color scales, grouping tasks and timed questions were some of the examples given. Gamification does not influence the affective reactions to products compared to a ‘normal’ questionnaire, but the answers had more details in open questions and lead to more positive consumer feedback about the questionnaire.

Sensory Science is not only important for humans, but there is also research done with pets. There was one presentation regarding the individual food preferences of cats. Cats have for example an innate dislike of bitter taste, but they also have individual preferences that they can acquire. The research focused on identifying cat populations with specific preferences with liking for fish or meat. It was an interesting talk about a field most of us are not familiar with.

EuroSense had the exceptional privilege to organize the gala diner at the wonderful Palace of the Dukes. We had the pleasure to dine in a beautiful room which was built in the 17th century. The evening continued with a dance party at the Cellier de Clairvaux where everyone showed their best dance moves. 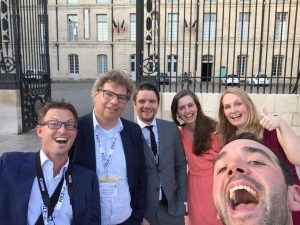 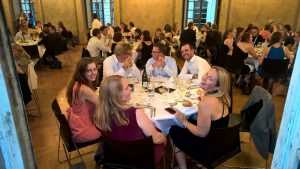 For a complete twitter-overview of Eurosense 2016 you can click this link! Thanks to Fabienne Hübener for the compilation.